Patrick and I are off on vacation this week, actually we are heading to Vegas and the Grand Canyon tomorrow. We are taking his family along with us so we are sure to have lots of fun.


Check back next week for a rundown on the fun we had and see pictures of our trip.


Until then, please enjoy this short video entitled. "The Closet"


http://www.youtube.com/watch?v=sskPvWid4oU
Posted by jaymes at 11:22 AM No comments: 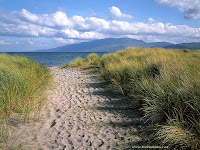 1. Take a 10-30 minute walk ever day. And while you walk, smile. It is the ultimate antidepressant.

2. Sit in slience for at least 10 minutes each day. Buy a lock if you have to.

4. Eat more foods that grow on tress and plants and eat less food that is manufacture in plants.

6. Try to make at least three people smile each day.

7. Don't waste your precious energy on gossip, energy vampires, issues of the past, negative thoughts or things you cannot control. Instead invest your energy in the positive present moment.

10. Life is too short to waste time hating anyone.

11. Don't take yourself so seriously. No one else does.

12. You don't have to win every argument. Agree to disagree.

13. Make peace with your past so it won't spoil the present.

14. Don't compare your life to others. You have no idea what their journey is all about.

15. No one is in charge of your happiness except you.

16. Frame every so-called disaster with these words: "In five years, will this matter?'

17. Forgive everyone for everything.

18. What others think about you is none of your business.

20. However good or bad the situation is, it will change.

21. Your job won't take care of you when you are sick, Your friends will. Stay in touch!!

22. Envy is a waste of time. You already have all you need.

24 Remember you are too blessed to be stressed.
Posted by jaymes at 10:02 PM No comments: 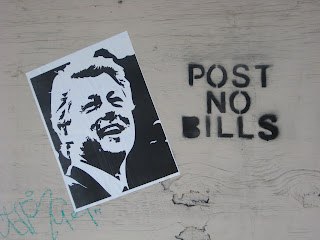 Since I spend most of my working day sitting on my tush, everyday during my lunch time I try and go out and take awalk to stretch my legs and let some blood flow to my backside. One or sometimes both of my co-workers go with me so we can get some exercise and fresh air, well as fresh as you can get with all the cars rolling by on Wilshire. One day a week or so ago I was out by myself ( yes they do let me wander out alone) and I was walking by the construction site
on the next block.Like most construction sites around LA, it it pretty much surrounded by tall plywood walls so you can't see what they are doing and they in turn can't drop anything on you as you pass. Now I have been by this site many times over the last few months, matter of fact I had walked by this very site the day before, but as
I walked through the covered sidewalk, the sign above caught my eye. Actually I glanced at it as I walked past it and I suddenly stopped and went back to make sure what I saw.
I just burst out laughing. It just hit me as classic LA humor. I loved it. I was afraid someone would graffiti over it before I could come back the next morning with my camera. Just had to share it with ya!!

later
Posted by jaymes at 8:55 PM No comments: 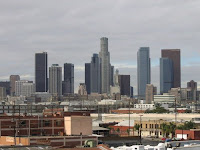 For those of you who do not already know this it might come as a big surprise to you but, Living in Los Angeles was something I had NEVER planned to do. It was just not on the list of things I wanted to do in my life time. But since many years ago I learned you never say never about anything, I would always answer people who asked me if I would ever move out of the Desert by saying "The only way I would every move out of the Coachella Valley is if I met a guy I could not live without and he could not handle living in the Desert, then I would move." Well that held true for many years, but then when I was least expecting it, Patrick walked into my life, and guess what?, he could not handle the heat in the Valley. I figured it would be much easier for me to learn to live in LA than it would for me to learn to live without Patrick in my life, so I moved. Much to the total shock of many of my friends in the Desert, many who still can not believe I have last this long!

Now let me tell you, adjusting to living in LA was not at all easy for me. Actually it was really hard. For one thing, I had never lived in a big city. Of course I had been to LA many times to party and shop and attend the theater, but that usually meant some else driving us in and out of the city. I can totally remember the first time I drove myself into LA. I was 1988, my bestest buddy,Robbie and his partner lived in Fullerton and he talked me into driving into the City for the weekend.
It as a Friday afternoon, I left Palm Springs around 4 o'clock and you know what that means?, yea you do, I hit LA right at RUSH HOUR!! I had never seen so many cars on the freeway in my life, and it seems the all wanted to hit ME! Now you have to remember back then we did not have Mapquest or a GPS system, no, I had a piece of paper in my had with notes from Robbie of what exits I was suppose to take, and everyone of them was on the opposite side of the freeway I was on when I realized they were coming up. Robbie will be the first to tell you I was a total mess when I got to the restruant we were suppose to met up at. Honey I was wrecked!! So much so that his partner had to drive my truck (yes I said truck, 1972 International Scout, which I named Ernie) to their house after we ate. When I got to their house Robbe had me laying on the sofa with a cold wrag on my forehead. They say time changes everything and I guess they are right. Now that I have lived here for almost 6 years I can cut you off and flip you off like the best of them!!

Over the few years I have lived here, my view about living in LA has changed, alot.
When I first moved here everything in my life had changed, new city, new job, starting a new live in relationship, new family to adjust to, leaving everything and everyone I had know for the past 16 years of my life behind. I will not lie and say it was easy, it really wasn't. But there has not been one time I have ever regreted making the move to LA, not even once. Over the last year or so I have started venturing out into the city more and more. One thing about me is I LOVE history and I always like to learn as much about the history of where I live as I can.(Just ask Kristen,the first time they came to Palm Springs I could tell them the history of just about everywhere we went,and I did not even realize it) So I started taking what I like to call "little adventures" on the weekend and exploring LA on a more personal level. Well just not LA but LA and our surrounding area. I have come upon some really cool things in my adventures and I will be sharing those discoveries with you here.

Patrick has been a very big encouragement to me in my adjustments to living here. When I first moved here he rarely left me alone anytime we were not working.
He and his cousin Mandy enjoy running off shopping and hanging out on the weekend but he stopped doing that for awhile after I moved because he did not want me to be alone. I finally told him to go and hang with her like he usually did. He encouraged me to get out and explore the city and find where things are. And he has graciously gotten me back home when I have had to call him and tell him I had no idea where I was or how I had gotten there!

I have had some really BIG adventures in my lifetime. Moving to LA is just one of them.
But like I said before, I have never regreted making the move to be with the
man I love. After all, I waited a hell of long time for him to come along, and I
couldn't miss having him in my life.

question for those who live in or around LA: Do you know where "Ata-Boy" was located?
answer coming up!
Posted by jaymes at 2:39 PM No comments: 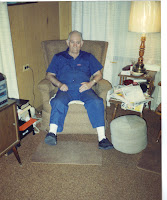 I really wish you could have met my Dad. His name was Jacob Franklin Neff, but everyone knew him as Frank. Had you met him, you would have like him, everyone did.
He was one of the most honest and hard working men I have ever know in my life.
In many ways he was a quiet man,but he sure did have his mischevous side, and if you had ever heard him laugh, you would know for certain where I get my laugh from.!
Yesterday would have been his 85th birthday, that is so hard for me to beleve.
Even though he has been gone from us since 1994, there is not a day goes by I don't miss him.
I will be posting more about my Dad in a future post on here, but for today, I just wanted to wish him Happy Birthday.
I love you Dad and miss you very much.
Posted by jaymes at 2:15 PM 1 comment: