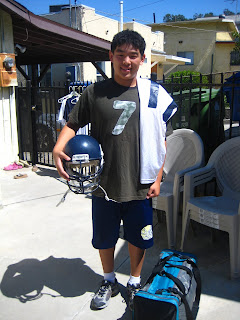 Growing up in Southeast Texas, High School football games were not simply something you attended, they were a part of your life!! Second only to deer season, High School football season is a MAJOR part of the year for the whole town, not just for people who have kids on the team. There are Friday afternoon pep rallies before every game. Half the town will pack up and go the away games,and you sure better get their early if you want to sit in the stands to watch a home game.

I attended school in Silsbee, Texas, Home of the TIGER football team. We even had a large replica of a Tiger getting reading to leap that was mounted on a platform with wheels so it could be moved up and down the sideline when Silsbee made a touchdown.
I have so many great memories of attending football games with my Mom and Dad and little brother. I am serious when I tell you the WHOLE town turned out for the game on Friday night. During my JR year in High School, we were district champions and when we played the semifinal State game in a town a couple of hours away...all the stores closed early..I mean every single store in downtown Silsbee, close at 3pm so everyone could be at the game.

I was really surprised to find out how different it was here in California. Out here, unless you have a kid on the team or are friends with someone who has a kid on the team, you probably never think about going to a game. For a couple of years I did attend the home games for a town close to Palm Springs. I had a close friend at work,Kathy, who was a single Mom and she had 2 great kids. The youngest was Brian.
Since I hung out with them quiet often, Brian and I got to be buddies. Since there was not a Dad around, he and I really bonded and did a ton of stuff together. Me being Gay was not a big deal to him at all. So when he got into High School he asked me if I would go to football games with him, I was pretty surprised but of course I said yes. So every home game there we were, and we both had a blast. Never once did I embarrass him by cheering for the wrong team!! After a while I had not only Brian to go with but about 5 or 6 of his school friends whose Dads would not come with them to the games. I had my own little entourage! The thing that was really wonderful
to me was,all of his friends knew I was Gay and it was not a big deal to any of them, no more than I had brown hair and wore glasses. To them, I was their friend Jaymes and we all had a blast on Friday night when we all attended their football game and then went out for ice cream after the game. It really gave me hope for a brighter future for these guys.

Now fast forward a few years, now I live here in good old Los Angeles and we have a
football player in the house!! The nephew is playing on the Jr Varsity football
team at his High School, Woodrow Wilson. He is living his dream... he has said he was going to play High School football since he was in Elementary School and here he is on the Jr Varsity team.

Since last March or April, he has practiced every afternoon after school. Every weekday during the Summer he was at practice from 3-6pm and never missed a practice.
Now that school has started he is a practice every afternoon till about 7pm.
I am so proud of him, we all are. I pick him up everyday after on my home from work and for me that is a great thing.

So today he had his first game. Patrick and I dropped him off at the High School around 1pm so he could ride the bus over with the team. Since the game was not until 4pm, we had some time to kill. So at 4pm there we were, Patrick, Miss Anna (patrick's mom)and the niece and Patrick's sister all ready to cheer for the team.

Now I need to stop for a second and explain something to you. Like I said before,
in my hometown, we are the Fighting Tigers...here at this school....they are the Mules. Mules...I asked Patrick who would name their High School football team the Mules? So I guess I have gone from a Fighting Tiger....to a Mule. I have been practicing but I have not been able to shout " GO MULES" at a game yet...I am trying
but it may take me a little time on this one...

So the first game was really exciting and his team did really well...I was surprised how well the team really worked together.. I was jumping and down
and shouting and having a blast, almost like I was back in Texas at a Tiger game.
The nephew is # 77, he was a starter for the first game and even recovered a
fumble! We are very proud. They actually won their first game, 26 to 6.
We are very very proud of our very own in house football player..our own
little Mule!!! 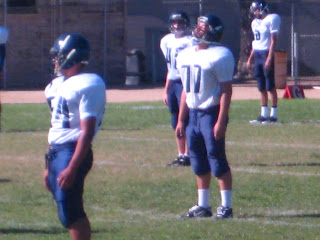 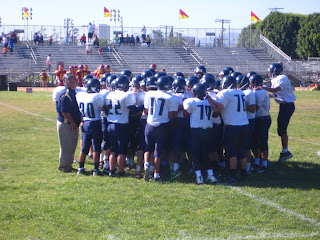 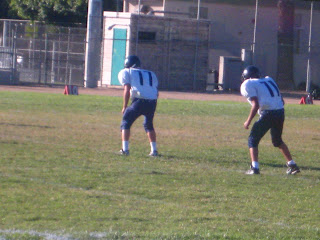 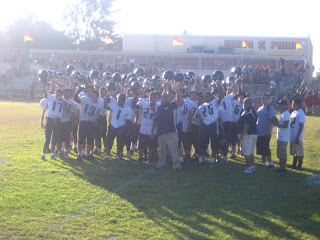 Posted by jaymes at 8:22 PM No comments: