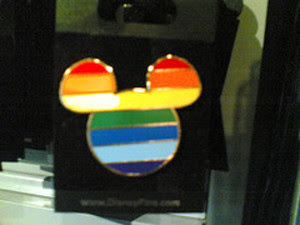 Well this weekend was the 11 Annual Unofficial Gay Days at Disneyland, and of course Patrick and I were there!! Well we were there on Saturday. It is a three day event, starting Friday afternoon and ending on Sunday evening. Now is called the Unofficial Gays Days because it is not sponsored by Disneyland. The weekend includes cocktail parties, a mini Shorts Film Festival, and of course Dance Parties!! (One on Friday night called " Wonderland "and one on Saturday night called " Kingdom"). There's a Scavenger Hunt, and different special lunches, like one for Gay Families, one for Gay Youth, one for the Bears (not the ones who live in the wood well I take that back, some of them just might). On Saturday they try to get everyone together for a group photo, we did not do this one, we have in the past and when we got our pictures there were so many people jammed together you couldn't really see who we were.
Now you may be asking yourself just how we could tell (aside from out Gaydar) just who all
was a member of our Gay Tribe, well that is pretty easy, you see, members of the Tribe are asked to wear a RED shirt, usually a T shirt, but not necessarily. And with around 30,000 members of the Tribe in attendance this week, you pretty much saw RED everywhere.(a little word of explanation, Saturday is Gay Days at the Disneyland Park and Sunday is Gay Days at California Adventure)
Now the ones I really have a soft spot in my heart for on these weekends are the poor unsuspecting Straight guys who come to Disneyland the first weekend in October wear a red
shirt!!! It is not hard to spot them, they all seem to be holding their wive/girlfriends so tight
up against them the poor things can hardly breath! Example: Patrick and I were riding the Monorail over to Downtown Disney to meet some friends for dinner. We get on the Monorail and sit down and as I usually do anyway, I put my arm across the back of Patrick's seat. Soon after we sat down and man and wife got on and sat across from us. They were laughing and talking and soon after they sat down, very soon, he reaches over and grabs the poor woman's hand and starts holding it and kisses her not once, but twice before the monorail ever moved. She actually looked a little starteled. He looked at us a couple of times and did not let go of her and until we got off the monorail. I have never been able to figure out makes some straight guys so afraid of us!
We did have a really good time. We rode so many different rides and went to so many different shops and just hung out. It was fun to people watch and meet other members of the Our Tribe, share some stories and just have fun together. There were couples there who had been recently married and that was really awesome to see. Disneyland has these really cute buttons they give newlyweds if you go to City Hally and let them know. We saw a few of those around.
Toward the end of the day I got a text message from our friend Kenny and when he found out we were at Gay Days, he and his husband (legally!!) came over from Long Beach and joined us for Dinner and we watched the fireworks together. It made for a really great ending to a very funfilled day. (check out http://www.gaydays2.com/)
( We took pictures of course and I will try to get them uploaded soon. I an volunteering with the "No on Proposition 8" campaign and this week I am scheduled to volunteer 3 night after work so it may be toward the end of the before they are posted, but check back, they will be here!!)
later!
Just to let you know the "Chop Suey Cafe" (Patrick's blog) is back open for business so
don't forget to go by and check it out! The link to his blog over at the "Blogs I Read" list.
Posted by jaymes at 8:52 PM No comments: