Now one of the little joys in life that PKL and I enjoy from time to time is going to Las Vegas. Now mind you, we are not heavy gamblers, you could say we are not much of gamblers at all, but we sure do enjoy just being in Vegas!! For the first several years we have been together we would manage to make it there 2 or 3 times year, sometimes we would catch a show at one of the Hotels or just go for the weekend and shop and eat and hang out. But for the last couple of years, with times being what they are, I have not been able to make the trip. PKL has gone a time or two with some of his kin folk, but it has been awhile for me. Since summer is quickly coming to an end and the Niece and Nephew will be heading back to school in a couple of weeks, we decided a quick trip to Vegas was in order. So we packed up the whole family and headed down Interstate Hwy 15 to "LAS VEGAS".

We headed out Friday night after the Nephew got home from football practice. We always drive, never even really considered flying over. I am usually "The Driver" for such trips but this time PKL started out commanding the SUV. Now for those of you
who may not know it, I drive a small car, a Honda Fit, I can't tell you how much I love it. But for this trip we rented an SUV, turned out to be a Chevrolet Traverese,
really nice vehicle, but to me it was HUGE! We changed drivers in Baker and let me tell,for me it was like getting behind the well of an 18 wheeler. We made it into Vegas very early Saturday morning and once we were settled into our room, I was out
like a light.

Saturday was a really beautiful day, the weather was very cool for Vegas, in the upper 70s. We ventured out to the Las Vegas Outlet Mall for while, had lunch at
Makino (it is a gourmet sushi & seafood buffet...VERY tasty!) and then headed
back to our hotel. PKL's parents headed out to the casino for a bit, and he and the
kids decided to head to the pool. Me, I needed a nap, so I stayed behind, grabbed a short nap and enjoyed some quiet time reading my book. It was delightful!!

After dinner we headed to The Strip to walk around some and check out a couple of stores. We can not go to Vegas without going to the Coca Cola Store and the M&Ms
store. 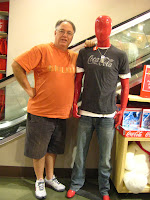 Thankfully they are right next to each other. We had a good time checking out the newly remodeled Coca Cola Store, but let me tell you, we had WAY too much fun
in the M&M store. 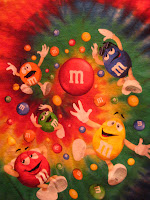 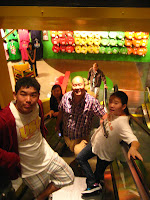 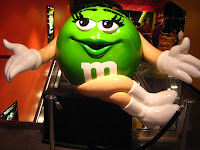 Afterwards we headed back our Hotel. The Parents went back to the Casino for bit and the rest of us retired to our room where we were all asleep in no time.

Sunday brought us another beautiful day, windier than the day before but really beautiful. We had the breakfast buffet at our hotel and I ate enough for at least 2 people. I always seem to do that at a buffet!!! PKL and I and the kids headed off
to one of our favorite places to visit, the Belliagio Hotel Atrum and also to check out the new City Center.

Of course the Atrium at Belliagio never ceases to amaze me. This time was no exception. It is so hard to realized every thing you see is made up of real plants and flowers. They change the designs with the seasons so we got to see the summer time exhibit. It was truly wonderful.

When we left tht Atrium, we headed over to the newest spot on The Strip, City Center. The last time I was in Vegas they were just starting to build it. It is made up of several Hotels and Condominium Complexes, Night Clubs, Art Museums and it also had its own shopping area called The Crystals, only VERY High End Shops. The entire
Center is really beautiful,but because of the economy,it is mostly empty. The one hotel that is finished and opened is Aria.

In the Crystals the one thing that really caught my attention was Mastro's Ocean Club. The dining area is enclosed in this beautiful wooden chamber that is suspended out in the open area of the Mall itself. To me it was beath taking to see it when we first entered the Mall.

After our visit to City Center we headed back to our Hotel for some pool time before we headed back to LA. Only problem was the Hotel's pool area had a sandy beach area and with the strong winds, we got more sand blasted than anything else.

After dinner we headed back to LA. Since the kids are still on summer break and PKL is on vacation, I was the only one who had to pull themselves out of bed the next day to face the real world.

Although it was a quick trip, we really had a fun time and hopefully before long PKL and I can make a trip back over there, just the two of us.

later!
Posted by jaymes at 5:54 PM No comments: