Where Did Summer Go?

Well for those of you who may not know it, today is the official last day of Summer.
Tomorrow is the Autumnal Equinox and Autumn officially begins. In Paganism, it is called Mabon. It is the day when the Day and Night are divided equally. For me personally,it starts one of my most favorite times of year..Autumn.

As excited as I am about the changing seasons, I have one question for each of you who reads my blog...."Where did the Summer go?"

It was just a few days ago that we were in Spring time, the flowers were all starting to grow and bloom and we were just starting to slip into Summer time, and all the sudden, here we are at the last day of Summer !! I don't know about you but I had things planned out that I wanted to do this Summer,and not a one of them did I get around to!! I think one thing that faked us out is that we did not have a very warm Summer for the most part. I wasn't until August that it even started getting hot. July certainly wasn't a hot month as it usually is. So with only a few weeks of really hot weather for us here in Sunny Southern California, it just did not seem like we had much of a Summer!!

Even though Summer seemed much shorter this year, I did have several very cool adventures, some I have blogged about and some I will catch up on soon.
For instance, on July 4th, I attended my very first Anime Convention with the Nephew.
If you are not sure just what Anime is, Google it, it is a form of Japanese Art, cartoons to us here. I have to admit I really did not know much about it when I volunteered to go, but I really had an amazing time. It started out in May when the Nephew said a group of his friends were going to meet up on July 4th at the Anime Convention at Convention Center here in LA. Now I knew he would not be allowed to go by himself so I told him I would go with him. So the morning of July 4th, we caught the Metro train in South Pasadena and rode it downtown to the Convention Center.
It was much easier than me driving down and having to pay for parking. I am sure the Nephew had a good time with his friends and I had a fun time getting to know a whole new world I had no idea existed!

At the beginning of Summer, I went hiking in Eaton Canyon outside of Pasadena with Patrick and some of his friends. It is a really beautiful place and a great hike. I will be posting about that adventure very soon.

Also this summer I got to do something I have wanted to do ever since I moved here (almost 7 years ago!!), I toured the City Hall here in LA. It is quite an amazing building. I joined the Summer tour put on by the LA Conservancy and it was really enjoyable. For those of you who may not know, I LOVE history, especially the history of the area I live in. When I moved to Palms Springs back in 1987, I dove into the history of the area. By the time I moved in 2000, I could give a pretty good history tour of Palm Springs and the surrounding area!! And I am enjoying doing the same thing with Los Angeles, there is SO much history here, and not just the Hollywood history!!

Of course we made a few trips to Disneyland. Even though we have our Annual Pass, we usually don't go to Disneyland during the Summer much, way too many people!!
A couple of weeks ago we decided on the spur of the moment to go see the fireworks on a Friday night, we figured it would be safe....WRONG!!!!!. I can not even begin to tell you how crowded it was. So we went to Main Street and staked out our space, and once the fireworks were over, we pretty much waited in the stores for awhile and headed back home. There are far more better times for us to go, like next weekend for GAY DAYS!!!!!

We had several more fun adventures this summer. I went to Palm Springs and had lunch with my Gal Pal, LB. I ended up spending the night there with my sister Doris(many of you know him as Jake). Patrick and I went to see the Pagent of the Masters in Laguna Beach(thanks to our friends Cindy and Jeff). A couple of weeks ago we took the Neice and Nephew to the Pantages to see "Legally Blonde" (which was really fun!) and just this past weekend Patrick and I went to see "Stand Up Comics..the Drag Queens" over the Broad Theater in Santa Monica. (I have not laughed so much in a very long time.It was taped and will be on the LOGO channel in 2010, I will keep you posted).

As much fun as we did have this Summer, to me, it is over way too fast. Growing up, the Summer seemed to last for so long. But I have been warned many times along my Journey that as you get older, times passes more quickly. You think so? I am hoping not because I have a whole host of things I want to do that I have not got to do yet!!

Hope you had a fun Summer and now as we slow down and tranition into Autumn, I hope each day brings a smile to you face and may you have many adventures along the way to Winter!!

later.
Posted by jaymes at 7:38 PM No comments:

Dawn...Starting Out A New Day

Since today is Labor Day and I have the day off (Yeah!) I thought I would take advantage of it and do something I have wanted to do for a long time, stand on my favorite cliff over looking the ocean and watch the sun rise.

I had plans to be in San Pedro early this morning to watch my friend Mike run in the "Conquer the Bridge" 5 mile run, so I just got up a little earlier and headed for the cliffs at White Point Beach,on the western side of San Pedro. This place is one of my favorite places to be. It is a high cliff overlooking the ocean and you can literally see for miles in all directions.

This morning I was on the cliff just minutes before the Sun peaked over the horizon (and through the clouds) to start a brand new day. As I was walking along the path to the cliffs, I was welcomed by a light breeze that was cool and filled with the smell of the ocean below. As I reached the point where you could see the beach line below I was surprised at the several other people who were stationed about on the beach and perched on the rocks below, also waiting for the sunrise.

Since it was cloudy I was afraid we would not be able to see the sunrise, but just
as it was time, the clouds parted some and there the Sun was peaking over the horizon. It was so quiet with only the sound of the ocean hitting the rocks below.
It was so beautiful. I just stood there and took it all in.

So often I think we are so busy and hurried in the morning that we miss so many beautiful sunrises. Each day a new day dawns for us and we are too busy to see it, we just take it for granted, and we miss so much beauty.

Just like everyone else I seem to be so busy in my everyday life. Always have somewhere to go and somewhere to be. I have been so "busy" it seems doing "stuff" this year that here we are in September already and I can't even remember what I have doing all this months and how it got to be so late in the year already!!

Standing there this morning, watching the sun peak over the horizon once again, like it has done everyday for thousands of years, I remembered that I need to slow down and take in all the wonderful things each day holds for me, and to pay attention and enjoy it all, everyday.

Hope you will join me in doing that. 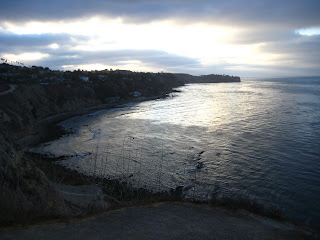 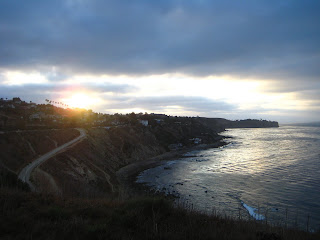 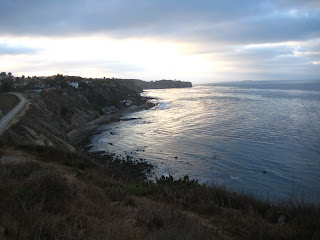 Posted by jaymes at 9:34 PM No comments: