>
There was a song back in the early 80's (for those of you who remember the early 80's) that everyone seemed to love, I know I did..it was called "Funkytown" and it was a really big hit. It was written by Lipps,Inc back in 1979 and through the years has been redone by several groups, none as good at Lipps, Inc.

Part of the lyrics say "Won't you take me to...Funkytown". and that phrase kept repeating through out the song..."Won't you take me to...Funkytown". Now I don't know about you, but every time I heard that song I wondered...where is Funkytown?, if I knew maybe I would want to go too!! Well wonder no more...cause quiet by accident...I found Funkeytown!! Yes Sirree!! It is right there on Sunset Avenue in Silverlake....so next time someone you know want to go to Funkytown....just drive them right on over...and who know, I just might be there to welcome you! 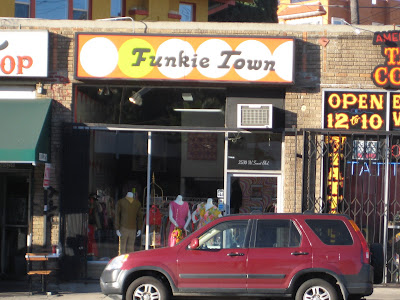 Posted by jaymes at 8:07 PM No comments: