Waking Up with LA 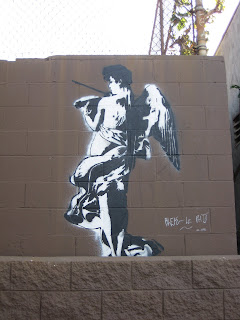 Something that I really enjoy doing is watching the City of LA wake up in the morning. Sounds crazy huh?

As most of you know I love scouting out places I have not been to in LA. I usually only get to do this on the weekend, but all during the week on my drives to and from work, I am always on the lookout for things I want to take pictures of and maybe learn more about. I have found the best time to come back and take pictures of things is very early in the morning, before people get to stirring about. Today was such a day. It seem since around Thanksgiving I have busy enough with doing 'stuff' that I have not had the chance to go on one of my picture taking excursions. There were a couple of things I really wanted to get pictures of before they vanished ( and believe things seem to vanish quickly sometimes around here!) So I got up early and headed out,actually I was leaving a little later than I had wanted to but the bed was oh so warm on this chilly morning if ya know what I mean. But I was up and out around 7:30 and I headed over to Sunset Blvd where there was a picture spray painted on the side of a building I wanted to get a picture of. Actually I see pictures like this all the time and they are always in little out of the way places and they are really small and most people do not even notice them. Pics like these you really have to get quick because they are usually painted over as they are considered graffiti. I was really afraid this one would be gone and to be honest I could not remember which building I had seen it on exactly. So off to Silverlake I went and to my delight, it was still there. Now to look at it you will probably wonder why I would want a picture of it, well I think the thing that excites me the most is that these are very temporary works of art and they are gone so quickly. It is things like this about LA that gets me excited. I look for things like this every day and in doing so it makes me really take in to account everything I see very day. How often on your drives to and from work do you really pay attention to what you pass by? I take the same route to and from work most everyday.
I drove this route for months not paying attention to what I was driving by, then one day on Melrose Ave I noticed this small black and white spray painted picture of
a mouse holding a sign, it was spray painted from a stencil most likely. I laughed when I noticed no one walking by it even seemed to see it. The next day when I drove by, it was gone, painted over. From then on I hooked. I started looking to see if there were others and from time to time I would see more. Since Patrick got me my little Canon camera year before last, I always carry it with me and when I can I stop and take pictures of the little masterpieces before they are gone. But this also got me to seeing details in allot of other things. You will really be amazed in what you see around you if you pay more attention to what you pass as you go to and from places.

But I learned early on in doing this, that by getting up really early and getting out, there aren't that many people out. Now mind you I am talking the weekend here.
But I love the early morning feel of driving around LA early in the morning and listening to the quiet hum of the city. And then as I am out taking my pictures or exploring a new street, I notice the City slowly starts to come alive. The sun gets a little higher and slowly I notice more people start stirring about and then slowly the street traffic picks up . The shops start to open up and before you know, you can hear all the normal noise of the City. I just love getting to experience this.