Mike the Poet was my tour guide in July when I attended the Downtown LA Artwalk. Here is a video of our tour,and yes I am in it,see if you can find me!!
Posted by jaymes at 10:43 PM 1 comment:

Want to tell you about a monthly event here in good old Los Angeles that I think everyone, yes everyone!,should do at least once, the Downtown Art Walk that takes place the second Thursday night of each month. Now for most you, thinking about being in downtown Los Angeles at night will probably send shivers down your spine, images of dark streets that look like Skid Row immediately come to mind, but rest assured, it is anything but something like that!! I know this for a fact because just last month, I attended it myself!!

Now I will be the first to tell you that driving in downtown LA really scares the hell out of me!!...all those one way streets and very fast traffic is a terror for me, that is why I usually just take the train downtown whenever I go to something there, but I had reserved a place on a tour that night and I was really afraid I would not have time to drive where I normally catch the Metro and make it back downtown in time after work, so I took a deep breathe and headed downtown after I got off work that night. True to form when I got downtown the traffic was nutts (for me)and even thought I had a pretty good idea where I needed to go, I could not find it.
Well after circling streets for what seemed hours (only about 10 minutes I realized later) I found a cheap parking lot ($5) and just pulled in, not even sure how far away I was from where I needed to be, but actually I was just a couple of blocks away from where my tour started. 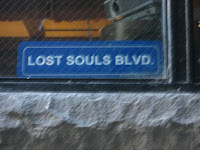 Now the Art Walk starts at 6pm and as I found my way to where I needed to be (the Lost Souls Cafe), you could tell the foot traffic was changing from working people going home to people coming out for the Art Walk. Since I had never been to this before I really had no idea what to expect. Yes there are several Art Galleries that you get to tour for free but also there are Artists of all kinds showing their Art in building open only for that night, building that were once downtown businesses but are now closed and have been for quiet a while. And everywhere you go there is music of all kinds, live music!! It creates such an awesome atmosphere, something you truly have to experience to understand. 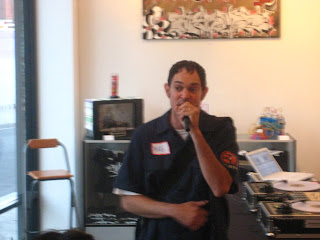 So I made my way to the alley where the Lost Souls Cafe is located. Sitting there in the alley in front of the cafe was the table where you check in for the tours. Now the tours are lead my different people who volunteers to take a group of people through the streets and show then the different aspects of the Art Walk. Now when you do go, I HIGHLY recommend you sign up and take one of these tours. I would have missed so much had I not done this. And I would HIGHLY HIGHLY recommend you sign up for Mike the Poet's tour, he is simply amazing. He is a 3rd generation Los Angeles native and very proud of it. He takes you on an amazing tour and stops and at different places and preforms his original poetry for you, which all had to do with Los Angeles. 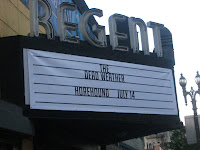 I was really captivated by the whole tour, first he took us into the Museum of Neon Art that had move to downtown and from there we took a back hallway into what use to be a very busy bank in the old days. Everywhere Artists were showing their different kinds of Art and people were laughing and talking, while listening to a live band.
From there we went down some side streets, Mike telling us about the history of the area we were in and stopping along the way to view differenet places. We even stopped in this old movie house, the Regent, that had not been used in MANY years. In the lobby there were different Artists and when you make your way into the main movie theater, all the seats are long gone but they are showing some kind of Art movie on the original screen, which I might say is very small according to today's standards!! lol. 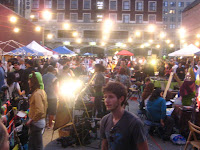 Mike took us to an open air street fair where there was just about anything you might want to buy! It was amazing. I guess at one time these vendors were at different places along the street during the Art Walk but the powers that be decided they could not do that anymore so the opened up this parking lot where they all show their stuff, and again there was a live band playing some great music. 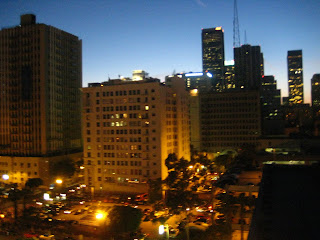 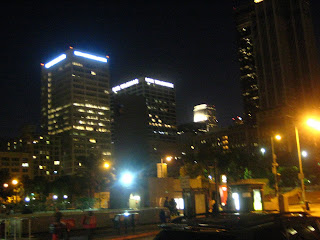 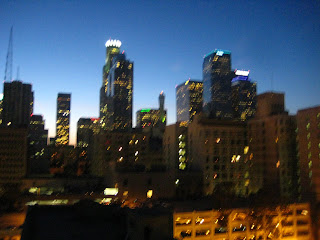 We made our way on down a little more and went to what became one of my favorite places on the tour. We went up to the pent house of this old empty building ( at one time it had been an office building when Downtown LA was really busy). There in the penthouse was several Artists showing their stuff and we were allowed to go out on to the roof and see the awesome view of Downtown LA at night. It was breathtaking. 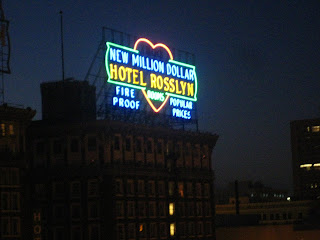 The old Million Dollar Hotel sign has been renovated and that night they turned it on, just beautiful. It was here that I took my leave after telling Mike goodbye(and thank you for a great time and I just happened to buy a CD of his work, which I love) and made my way back to my car. By now it was around 9:30 and the streets of downtown LA were FULL!! I heard the next day there was an estimated crown of 6000 people that night..it was so much fun!! I realized as I made my way back to my car that actually we had only gone about 3 blocks on the entire tour, and saw and experience so much!

The next Downtown Art Walk is going to be this coming Thursday, August 13. If you can, I would go and just hang out and see some great Art and listen to some great music. There are all kinds of places to eat there too and there are a few food vendors along the way. Hey also have these brightly painted buses that go up and down the streets and you can wave one down and get on,they are free!!
And I just happen to know that Mike the Poet is going to be leading another tour this Thursday, and you might just want to congratulate on him for being a new Pappa!
He and his wife recently had their first baby, just about a week after the last Art Walk!!

You can find all the information you need to have a great time at http://downtownartwalk.com. Unfortunately I will not be able to go this month, I will be attending a lecture at the Annenberg Space for Photography, but GO, HAVE A GOOD TIME!! and let me know what you you think!! 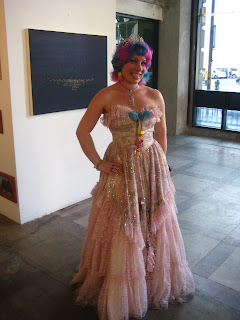