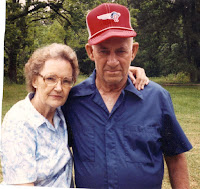 Today would have been my Mom and Dad's 56 Wedding Anniversary. My sister and brother and I were talking about it yesterday and we don't know exactly when they met and started dating. My sister was around 9 when they met ( my Mom had been married once before) and she remembers the first time they saw my Dad, but she can not remember when they actually started dating. She was a waitress at the Blue Bonnet Cafe and he worked in the oil field. They were married on June 25, 1952 in Silsbee, Texas at the home of her sister, Oma Capps.

In later years this day would also become the wedding day for my sister and my brother. But when it came time for my own wedding day, I was the rebel, we got marriedn in July!
My Dad passed away in 1994 and my Mom just passed away in 2006. But every year my family always celebrates their Anniversary in our own special ways.

Happy Anniversary Mom and Dad.
Posted by jaymes at 5:56 AM No comments: