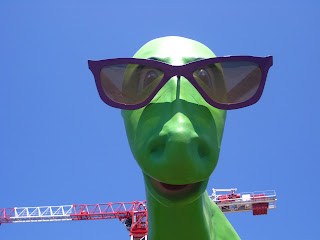 On the Monday of our vacation, Patrick and I slipped away from everyone and headed to California Adventure. The original plan was for us to start at California Adventure and end up at Disneyland. For a long time we have wanted to go to the Parks during the week so there would not be so many people. So we decided we would go on Monday, August 25, and beat the crowds....WRONG!! It seems most schools had not started back yet and EVERYONE who had not been to the Parks during the Summer decided Monday must be a good day for them too.
It was so busy. We got there right after the Parks opened and we still had to stand in line to get into California Adventure, which is never that busy!

So once we were in we headed across the Park to ride the newest ride,the Toy Story ride.
As we were walking over there, I got a great idea, so I turned to Patrick and said, " Hey Honey, let's do something we have not done before, we at least I haven't done it. Let's ride the roller coaster!!!" Patrick kept on walking and just shot me that side ways look I get every once in a while and said " Are you sure?" Haven't you ridden it before?" So when I said I hadn't
he gave me that look again and said " Well ok, but if we are going to do it we are going to do it now before it gets too busy". Now I am not a big fan of roller coasters and when we were first dating I had a very bad experience with one at Six Flags Magic Mountain, but that was years ago and California Screaming had never seemed that bad of a coaster to me. So off we went. When we got here we only had to wait for the very next coaster. The only thing I had requested is that we not sit in the very first car. So we ended up on about the middle. We got in and away we went, to the lift off area. Now I don't know if you have ever seen the California Screaming coaster , but it goes out to the launch area and stops and then they count down the time for you till it gets to one, and then you take and are going 60mph in about 10 secs. Well let me tell you, it hit one, and we took off and I knew right then and there this was not the smartest decision I had made that day. I suddenly remember why I don't ride roller coasters, but hey, when you are strapped in and going that fast, only one thing you can do, hang on and pray it will be over fast.
Well honesty, once we really got started I was screaming right along with Patrick, but I think it was for a different reason. I did ok and we came to the part where we made the big loop in Mickey's ear and as we approached that, I just closed my ears and it did not seem so bad. After you make that loop the ride is pretty much over and you go back to where you started. Ok, well I survived what will truly be my last roller coaster ride in my lifetime and we headed back to let the next group of thrill seekers take their turn. So we stopped, were unbuckled and Patrick jumped up and hopped off and I stood up to follow him and for some reason my feet kinda got tangled up with each other and guess what? yep..down I went. Now fortunately for me I somewhat caught myself on the side of the ride so I did not go face first into the cement, but I did go down on my left knee, hard. The thing I do remember is that when I hit, the whole crowd of people waiting to get on the ride went "WHOA" in unison. Now Patrick was several steps in front of me so he did not see how graceful I went down, but he did run back and make sure I was ok. Honestly, I was a little shaken up, a little embarrassed and in pain. When I looked down I had taken the top layer of skin off just below my knee cap. One of the Crew members asked me if I was ok and I yea, I was old and I fell all the time. We went to the restroom to check out really how bad my knee was and while I was checking on my knee, Patrick found the nurse's station so we headed over there. Now. like everything else at any Disney Park, it was so blended in with the other buildings, it was much bigger than it looked. We went in and a very nice woman came out of the back and I told her what happened and she took us into one of the exam rooms and took care of it and I left with a nice band aid on my knee. But let me tell you a little something about the "Nurse's Station", it was huge. They are ready for any emergency that can come up there. I believe they could do open heart surgery if they had to . It was awesome.


Well I was not going to let a little thing like a nose dive off the roller coaster stop us from having a fun day and we did just that. We did have to stand it line for the new ride, but it was totally worth it. The line moved rather quickly and we had so much fun on the ride. Be sure and do the Toy Story ride if you are California Adventure. ( I am not going to tell you about it, don't want to spoil it for you, but it truly is allot of fun)

We did several other rides we enjoy and since it was hot (did I mention it was HOT), we headed over the the Raging Rapids ride. I really enjoy this ride but I can't get Patrick on it much since we usually get totally soaked, but since it was so warm (did I mention it was HOT) he was more than happy to ride. We lucked out and go to ride with some truly fun people who were veteran riders like ourselves who truly wanted to get soaked. And we were not disappointed!!


After a while we decided we would come back and do Disneyland another day (We are Disney aholics, we have the annual pass where can go everyday if we want). So the last ride we did before we headed out is really and truly my favorite ride of all time, Soaring Over California.
If you have never ridden this ride, you are so missing out on one of life's treasures. For me, the only thing wrong with it is that it does not last longer than it does.


So after that we headed back to the house. The first full day of vacation was so much fun, even if I had a bum knee.


To see pics of our day at California Adventure go to http://www.flickr.com/photos/texaninla/
Posted by jaymes at 7:21 PM 1 comment: