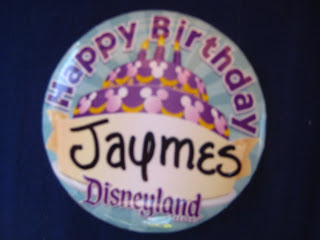 Wow !!! It's that time of year again.....my birthday has arrived once again and thankfully I am still here to celebrate it!!!

Patrick and I took the day off to celebrate my birthday because we plan to start out the celebration at....DISNEYLAND !!, ok I can hear you saying to yourself already, "You guys go there all the time anyway so what's the big deal about going there on your birthday?" Ok,well let me tell you. First off, I love Disneyland, I can never go too many times. Also, this year, you get in free on your Birthday!
But,since we already have out Annual Pass and I would have gotten in using it, Disney gave me a $69 Disney gift card!!! Now...if that is not worth going to Disneyland on your Birthday, I don't know what is!!

So, we have planned on going to Disneyland before we found out about the getting in on your birthday thing. Ever since we have been going to Disneyland we have always wanted to go on a week day so it would not be really crowded and that way we could ride more rides and not have to stand in long line. Patrick did this last year with our nephew Darren and they rode almost all the rides in Disneyland and did not have to wait in lines. Also that it was totally raining that day probably helped to!!
So we had our game plan all figured out on where we were going to start and what rides we were going to hit first, you the whole thing planned out and we were excited! Then....we got to Disneyland around 11am. One of the first questions we asked was "Why are we having to park on the top of the parking structure?", that in itself was a bad sign. We got out and started to the tram to take us to the Park and my jaw dropped....The tram loading area...was TOTALLY packed with people. Now the first thing I thought was " Not all of these people could have the same birthday as me??!!" Well I can sum it up for you in two words....Spring Break. Yep that's right, Spring Break, I have never seen so many people at the Disney Parks, not even at Christmas, honest. My heart just fell,there went our plans of a nice weekday at the Park. I seriously wanted to cry, I was so dissappointed. I told Patrick I had just rather go do something else but he would not have it. So we waited, and waited for our turn on the Tram and then we had to wait in line at ticket counter to get the gift card. Now we have never had to wait in the ticket line before we buy our Annual Pass online, so this was someething new, and interesting. So once we got my gift card, we decided to go to California Adventure first and ride my favorite ride, Soaring over California, and then head to Disneyland. The lines to get in were long for both Parks, so once we got in we headed over to get our fast past for Soaring.
Wrong!! The time for the fast pass return was 6:30 pm, it was now 11:45!! We would not even be in the Park at that time so we just passed it up. We did walk around the Park and went over to the Toy Story ride (a new fav). After a couple of hours of wandering around we headed over to Disneyland and walked around. Even though we did not get to do what we had hoped, we still have a fun time. One neat thing was, since I was wearing my "Birthday Button", all everyone would wish you Happy Birthday and I got to see alot of other people who share my birthday! I was a a neat experience.

So later in the afternoon we headed back to get changed because we were going out to dinner at an undisclosed location, at least to me. Patrick would not tell me where he was taking me for dinner, and what a very nice surprise it was!

Patrick made reservations at a really nice restaurant in Pasadena called "Roy's".
It serves Hawaiian fusion cusine. It was a beautiful place with a very diverse group of people eating there. As we approaced the restaurant you could see people eating ourdoors most of the guys had on jackets and I immediately felt I was underdressed but Patrick told me not to worry. As we approached the door, it opened and out came a group of people in T shirts and shorts, so I felt much better. We only had to wait a few minutes to be seated, and as we were seated the young lady asked which one of us were having Birthday. That kinda surprised me and I told her it was me and she handed me my menu and wished me a happy birthday. I was really surprised when I opened my menu and the first page was addressed especially to me, by name!! I know I did a double take when I saw a greeting addressing me by name on the page!
It just said they hoped I had a great birthday and thanks for chosing to celebrate with them and it then went on to wish me Happy Birthday in Hawaiian. It was a nice surprise. The next surprise of the evening was our waiter, Michael. He was a HOTTIE!
seriously he was, even Patrick thought so. He was really nice and helpful and alot of fun. He was an excellant waiter. The food was very good and we finshed it off
with their VERY excellant Molten Lava chocolate cake, with ice cream...to die for!
At the end of dessert, Michael asked Patrick to sit next to me so we could take our picture as a remembrance of our evening. It was truly a fun and delicious evening. 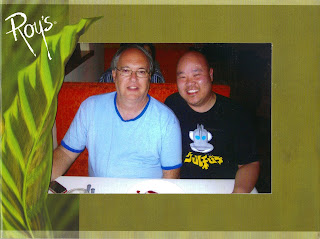 We were suppose to have another Birthday Cake with the family but we got home late and everyone was in bed, so we will to that tomorrow night.

It was a great Day!! I sure hated it had to end, but then again..there is alway next year!!

ps..in case your are interested...www.roysrestaurant.com...we HIGHly recomend it.
Posted by jaymes at 10:55 AM No comments: 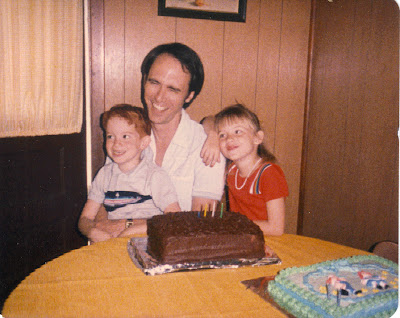 I do not think I have mentioned this before, but I share my Birthdate with two very special people...my niece, Sarah ...and her twin brother...John. Now for 25 years I got to celebrate MY Birthday, it was MY day. But let me tell you, once the twins were born on MY Birthday, I cease to have a day to celebrate. From then on it was the
"TWIN'S Birthday",never Jaymes and the Twins Birthday, no siree, it was only the TWIN'S Birthday...not that I am bitter or anything mind you!

When the twins were about to be born and it was pretty clear that they were going to be born close to midnight on March 18th, I am told from some pretty good sources that my brother BEGGED their Mom to hold off until after midnight. He just knew I was gonna be upset if they were born on MY Birthday. But you know babies, they have a mind of their own and they wanted out,NOW! So now MY special Day is OUR special day and I would not have it any other way.

I found out only a few years ago that the Twins have a custom they celebrate on their birthday that until recently I was not included in. They try and see which one of them can call the other one the soonest after midnight that starts our Birthday.
So when I found out about this, I wanted IN!! You see, when it is midnight in Texas where they are, it is only 10pm here where I am!! ha ha ha!! And once I call them right after midnight their time, I have learned to turn off my cellphone because you can bet that John will set his clock and call me back right at midnight, MY time!!
How do I know this you ask..he has done it the last 2 years in a row!! Yep he sure did, so this year I turned off my cell after I called him. He told me he almost called the house phone, but he did not want to have to answer to his Uncle Patrick the next time he sees him, smart boy!

They are both really great kids (they will always be kids to me). Sarah is now married to a great guy and they have 2 children and she is an awesome Mom.
John now raises his two kids as a single Dad, and he is a awesome Dad. I could not be prouder of both of them.

Happy Birthday to you both!!

ps... in this picture I am celebrating my 32nd birthday and they are celebrating their 7th. Notice there are 2 birthday cakes in the picture...my Mom made mine and the one off to the right is their's...store bought.
Posted by jaymes at 10:00 AM No comments: