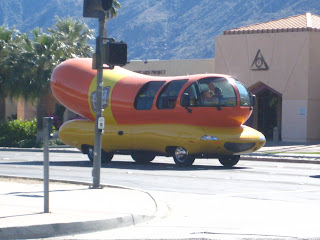 You just never know what is going to kick off a set of adventures in your life. Take my the adventures I had last weekend for instance. On Thursday night I received an email from an old friend of mine in Palm Springs, Dave. Now Dave and I have know each other for several years, and during that time, we have sure had us some fun times together. Dave actually only lives in Palm Springs for about 6 months of the year and the other 6 months he lives at his home in Oregan. Dave retired several years ago and enjoys the climates in both places. Well it is getting about that time of year when Dave heads back up north to get away from the heat of the Desert.
He told me last year he was not sure how many more years he was going to be able to come down to winter in the Desert since he is in early 80's and is not sure how safe it is for him to be driving down by himself. So thinking this actually may be the last time he comes down, he wanted to see if I was going to be able to some see him before he leaves. So after checking with PL to make sure we did not have anything planned for the weekend (and we didn't), Dave and I made plans to get together on Saturday afternoon at his place.

After those plans were made, I got to thinking,since I was going to be in PS, maybe
my friend Goya and I could have breakfast and catch up on all the gossip. So I called Goy and sure enough he was free so we made plans for me to be at his house at 8am on Saturday so we could have breakfast and we could drop off his Jeep at the dealership for servicing. I was now officially excited about the weekend!!

The next afternoon as I was driving home from work, I got to thinking again (I do some of my best thinking while I am driving!), it has been many moons since I actually got to see my friend PW in Joshua Tree. Since I was already going to be down in the Desert for the day, maybe I could shoot up to Joshua Tree (about 30 miles or so from PS in the High Desert)after I leave Dave's and have dinner and catch up with him and then drive back to LA later that night. That way I could catch up with 3 of my close friends! So I called PW and he said great, come on up and then "Why don't ya just spend the night?", Wow! that thought had not even crossed my mind!! so I checked with PL and he said "Sure, that would be ok". So just because of one little email, I now a weekend of fun adventures planned!

As most of you know, I truly love the Desert. It is truly a fun and magical place for me. The weather was really beautiful, although I just missed a horrific wind storm the night before I went down. I got to visit with all three of my friends
in nice easy way and had a blast with all of them. Goya and I got to check out the hot guy in the booth next to us (I can not describe just how HOTTTT this guys was,he was there with his girlfriend and every Gay man in the place hated her!! LOL) and we got in some shopping time together. Dave and I had a great time, talked over some fun times we have had and just enjoyed each other's company. PW had cooked up some of his aweseme spaghetti and we had some cocktails after dinner and caught up with what has been going on since we saw each other last. AND, we watched the movie "Twilight". It was his first time to see it and it was my 5th time.(Yes I am totally hooked on this movie right now like a 13 year old little girl, scary huh?)
I left the next morning headed back to LA but I just was not really ready to go back to the Big City, so I headed back to PS. I ended up in Desert Hot Springs, which is on the other side of I-10 from Palm Springs and it is the first place I lived when I moved to California. I have not been there in several years so I drove though town and saw all the changes that had taken place since the last time I was there, not many really, Desert Hot Springs just doesn't change that much. I found the house I use to live in, just the same just painted a different color. I finally made my way over to PS and went to an Art Festival they were having in the park and then decided I better head to LA.

It turned out to be one of the most relaxing fun weekends I have had in a while..and it all started with an email....

P.S. So you might we wondering just what the Wiener Mobile had to do with my weekend in the Desert. Well, let me tell ya. Just as I was leaving PS, I was stopped at this light and low and behold, the Osar Mayer Wiener Mobile pulled up to. Now some of you will remember the Oscar Mayer jingle at the top of this posting, many of you probably will not, because it came out in 1963!! But ALL the way home I kep singing that stupid jingle, one I had not thought of in years, but I still knew all the words to!! I am just thankful I was not stuck singing "Small World"!!
Posted by jaymes at 7:43 PM No comments: