Since it has been just a couple of weeks since Patrick came home from Taiwan, we
really had not made any big plans for the Labor Day weekend. One thing I really wanted do was not to do anything, just spend some time hanging out at the house and vegging as much as possible. So when Patrick asked me if I wanted to go to the San Diego Zoo with our buddies, the Au's, I said sure, I knew we would have a good time, we always do when we hang out with them. I was even a little excited about going to the San Diego Zoo, some 25 years ago it was one of the first big adventures my BFF LB and I had taken, our very first "road trip" together. Sometime when I feel really brave I will even share a picture of me and the flamingos on that fateful day. (One she finds hillarious and one that gives me the shivers every time I see it, how could she ever
let me go out in public dressed like that!!)

So it was not until Saturday morning that I realized we were not going to the actual San Diego Zoo, but to the San Diego Safrai Park!! I had heard about it
for years but have never taken the trip over there to it. And let me tell you now,
it is NOT in San Diego!! A little close maybe, but not real close!!

We met up with the Au's and their friend, Hamilton at a Chinese cafe called
Younique, and it was,
first time I had been there but it a nice place, a happy place to have breakfast.

So after breakfast we headed out in our 2 cars,and a couple of hours later
we arrived at the Safari Park. Now up until now I really had no idea where it was
located, and we were following our trusty GPS and at times I felt like she was
having a good time with us and just having us drive down some roads we really did
not have to be on at all. But finally we drove into this really beautiful valley
and there it was!! Really, out in the middle of no where. But I guess when you have
as many wild animals as they have roaming around free, you really don't want it
in a residentual neighborhood!!

Since it was a major holiday, the place was packed. We found parking close
to the entrance but our friends were not so lucky. (I have to tell you, if you
are somewhere where the parking lot is going to be really crowd, you REALLY want
to have Patrick with you, the parking faries LOVE him!! No matter how crowded a
place is, the car Patrick is in, always get a primo spot!) 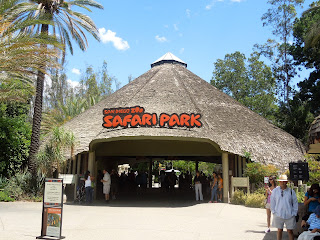 The Park is really amazing. They have so many things to see, they have different
paths that lead to certain habitats like the goriallas, lion, elephants and
such. It is really like you are walking in a dense forest as you are walking
to the different areas. 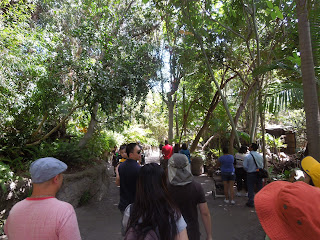 The most awesome area is where all the animals roam
free in a huge area, it is really breath taking to see. We took the tram
tour that takes you down into that area and they show you the many different
animals and explain thing about each one. It was really amazing to actually get
to see them roam around like they would in their natives lands. 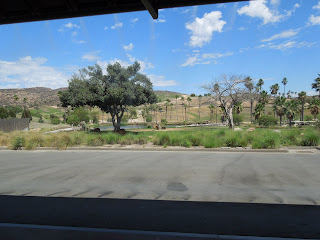 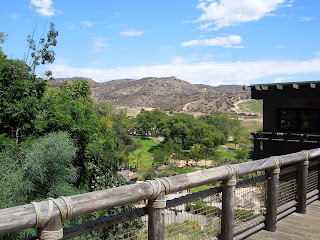 Once the tram trip was over we started making our way back toward the front of the Park,stopping along the way to get a view of the new baby elephant that was only
3 days old!! Our friends were staying over at a Hotel that was close to the Freeway, so we headed over there to let them get checked in. We were able to walk
over to the Elephant Bar that was close to their Hotel for dinner and
then Patrick and I headed back home.

I would really recommend if you have hot been to the Safari Park go!!
It is an amazing place where they are actually breeded wild animals that
are going extinct and returning them back in the wild of their native
habitats. I has been doing so for some 40 year now! The one thing
I sould caution you on though, go when it is not a hot day. Let me
tell ya, it was HOT and humid yesterday. I am sure we will be going
back at some point, it really was a fun day!