So yesterday I had a Doctor's appt in the after noon so I took off work at noon so would not have to rush to get there. I work in Beverly Hills and my Doctor is located in Alhambra (just a couple of miles from our house),which is pretty much across town. It was a really beautiful sunny Southern California day so I decided to treat myself to lunch since I had the time.

Now to many people, Burger King is not an exciting place to eat. But I happen to enjoy their food and every so often I will treat myself to something on their menu. Now I do have my favorite Burger King and it just happens to be on my way home from work! It is pretty close to downtown LA and when you sit outside you have a nice view of the downtown sky line (and the major 101 free way that runs close to downtown!)

So I got my food and made my way to their little patio area to sit out in the sun and enjoy my food and the beautiful day. I found a nice spot and just as I sat down, the first one appear....the pigeon. Now I am not talking about your run of the mill variety of pigeon, oh no, this one was a honken big pigeon. And it just landed on the railing about 4 foot from me and just sat there and stared at me. Now pigeons
are not an oddity here in LA. You see them all the time around certain eateries where they have BIG signs that at..."DO NOT FEED THE BIRDS". But I have to say
this was one of the biggest ones I have ever seen.

So I started unwrapping my sandwich and it just sat there and kept staring at me. Then it did something that startled me at bit, it jumped off the rail and onto my table!
I shooed it off and it jumped back on the rail and continue to just stare at me.
It made me think of the cartoon I had seen once where this vulture just sat and stared down at the guy who was crossing the desert on his stomach looking for water.
Then.....a second one landed, not far from the first and there they were, both of them staring at me. I have to say it did make me a little uncomfortable, but what really made me a little uneasy was when the 3rd and 4th ones landed on the same rail.
At this point I was half way through my meal and had made up my mind I wasn't going anywhere. It was MY afternoon off and I was going to enjoy sitting outside having lunch no matter what.

Then I noticed something that brought back memories of the Alfred Hitchcock movie,
"The Birds" to my mind. As I happened to look up at the telephones lines running
near by, there must have been 15-20 more of them sitting up there,and I swear they were all looking at me!!! The first one jumped on my table again and I shooed him
off and I got to thinking if they swarmed me ... I was gonna throw my packet of fries
up in the air and hopefully they would go for them and I could escape!! 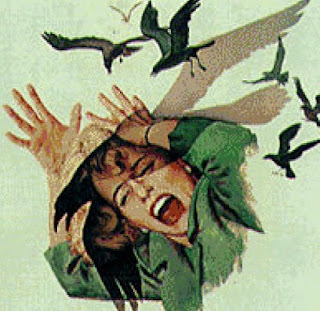 I had flashback of the movie where the woman was running away from the birds and they were swarming her and eventually killed her. There I would be, sitting out on the patio at Burger King being swarmed by a bunch of wild pigeon while the inside
patrons ate and watched in safety.

It was at this point I was just finishing my last french fry when I noticed
one of them had gotten off the rail and was on the ground walking up to me on my right hand side. Guess he was gonna try to sneak up behind me. So I gathered up
my garbage and stood up thinking they would probably all fly away, but no....
they did not move.....not a one of them. They all sat there perched on the railing
looking at me. As I got up to throw my stuff in the trash, I did have a thought that
maybe I should not turn my back on them, maybe that was what they were waiting for, but not a one of them made a move.

After I threw my stuff in the trash I turned and walked back to my car, and when I go to my car I looked over and there they were, watching their next victim sit down and settle in to enjoy eating outside and enjoying the Sunny day, or so he thought.

later
Posted by jaymes at 10:52 AM No comments: