And Her Name Was Jennifer 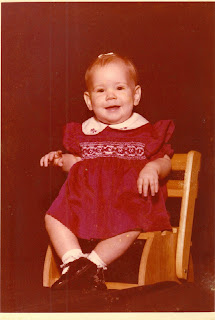 We all have certain days in our lives that are in themselves special. It is not a day we "celebrate" in any certain way, it is a day that somewhere in our past, a very important event took place in our lives. And on that day each year we pause to remember that event and how it changed our lives forever. Today is such a day for me.
By no means is it a sad day and I really do not want you to take this as a sad blog entry, but it is a very special day to me, and I have decided to it with you.

Most of you know that at one time in my twenties and early thirties, I was married.
My wife's name was Louise and everyone called her Lou. I just 21 and she was 18 when we married. At the time I was in Seminary (yes at that time I was Rev. James Neff) and she was just finishing up High School. To be honest, that seems like a whole life time ago.

I had dropped out of Seminary and we were living in West Texas in the town of Odessa when we first got the news that we were going to be parents, We had almost been married a year and a half at that time. She was a housewife and I was working as a Machinest (sounds really butch doesn't it!!). To say we were suprised would be an understatement but we were extremely happy and excited. Since both sets of parents
lived in East Texas, we let them know they were going to be grandparents by sending them a pair of baby booties in the mail. Lou's parents were estatic, it would be their first grandbaby, and my parents, well let's just say they were not as excited at the time.

I had never really been around a pregnant woman before, I mean on a day to day basis. I was there when my sister had her 3 kids but I did not live with her day to day. Let's just say it was a learning experience. At first Lou had really bad morning sickness and many our days started with her waking up and running to the bathroom to throw up. I tried to be supportive of her when it first started but after about the 3rd time I ended up on my knees next to her by the commode throwing up too, she said it was ok if I was not real supportive and just get her a wash cloth when she was finished, that seemed to work allot better.

So the months rolled along and things went really well. Lou was a really athletic person and was on a City volleyball team right up until she was 8 months along.
As the months went along, Lou got bigger and bigger. She walked everyday, played volleyball at least a couple of times a week and was just very active. One night
I went to watch her play, she was an agressive player to say the least. She could come out of no where and spike the ball over the net before the other team knew what happened. Well like I said, as her pregnancy went on, she got BIGGER. This particular night I was there watching her play, the opposing team served the ball to her team, Lou was on the front line. It was kinda like slow motion for a few seconds, she was running toward the net, the guy on the oppoing team was running for the net and suddenly it was not slow motion anymore, Lou jumped up to spike the ball, her stomach and the baby went under the net and slammed the poor guy from the opposing team who was also running toward the net. He literally went flying backwards and hit the floor. I was on my feet in a second. She had literally slammed into him with the baby and knocked him down!! He was on the ground and Lou was still standing there acting like nothing out of the ordnary had happened. The referee stopped the game and ran over to check on Lou as the other poor player's team mates ran over to check on him. When it was determined that everyone was ok, they gave Lou's team a foul for her hitting the other player with the baby!! Her team still won the game!!

That was one of the last games Lou played that year. The next week her Doctor decided no more streneous activity and stopped her bike riding, volley ball and tennis games. He did encourgae her to walk eveyday but for someone as active as Lou, that really was not enough.

A week or so later, Lou started not feeling well. A trip to the doctor showed she had developed toximia and he put her on total bed rest. It was then that he told us he had made a mistake and should have let her keep being as active as she had been for awhile longer.

Lou's mother had planned on coming out to help her when the baby was born, but she came out early instead. There were regular trips to the doctor to keep tabs on how the baby was doing and things went really well. One afte noon while we were out walking (at the furtherest point of our walk away from our house)her water broke!!
As I said I had not been around a pregnant woman before so I immediately though she would have the baby right there!! But we slowly made it back to the house and to the hopital where after having a 24 hour labor...Lou gave birth to our first child..
a beautiful little girl....whom we named Jennifer.

I honestly do not think I have every seen a more beautiful baby in my whole life.
When they brought her out of the delivery room and let me hold her, I cried. I think for the very first time it really hit me that I was a Dad and I was totally responsible for this little girl who was looking up at me. It is a really sweet over whelming feeling.

Jennifer was such a sweet baby. She did not cry much but she sure did smile allot.
When we was a couple months old we made the trip back to East Texas so my parents and all our relatives and friends could see the new baby. We had driven about all night to get to my parents, and when we got there, my Mom was sitting on the front porch waiting for us. She walked out to the car and without hugging us or anything, took Jennifer out of my arms and turned right back around and went in the house and left us standing in the yard. Lou and I just laughed. We spent a week at home that trip and we decided we really needed to move back to East Texas so Jennifer could be around her Grand parents. So about a month later, we did move back and it indeed was a very good thing. We moved in September.

Christmas that year was a big event because it was Jennifer's first Christmas. We always spent Christmas Eve with my family and then drove over to Lou's parents where we spent the night and had Santa Clause on Christmas morning.

The week after I celebrated my 24th birthday, Jennifer came down with a cold. Lou took her to her pediatrician to make sure she was ok and he told Lou she had an upper respitory infection and gave her some anti-biotics. I was at work and after seeing the Doctor they stopped by my work so Jennifer could see her Daddy.
By the time I got home that afternoon, you could tell she did not feel well. She cried so much that night that we had to take turns holding her and trying to comfort her. I was around 4 am that Lou's Mom showed up at our house because she could not sleep for worrying about the baby. Right after she arrived, Jennifer stopped crying.
I was holding her and when I went to move her she was very limp, we immediately jumped into Lou's Mom's car to get her to the Emergency Room 25 miles away. Lou's Mom was driving, Lou was holding Jennifer and I was in the back seat. When we arrive at the hospital, she was not breathing. They told us that she had passed away somewhere along the way to the hospital. Her upper respitory infection had progress into viral pneumonia. She was 8 months and 10 days old.

I learned many things about life and myself during the next few months. I learned you can actually live through more pain than you could ever imagine you could. I learned that even though there are days you wish you could lay down and die because the pain in your heart is so great...you won't. I learned it is ok to let other's be there for you when you don't know what else to do. And as time goes by, the pain lessens and it becomes bearable and after a while longer, you can learn to live with it and go on with your life.

Today would have been Jennifer's 33rd birthday. It is hard for me to really grasp that fact. Many times through the years I have wondered what she would have looked like as she grew up and what kind of person she would have been. So many people told me she looked like me, our other two children took after their Mom. But wondering is all you can do when someone is taken from you at such a young age.

So today I celebrate a special day in my life. It is on this day every year
I stop and think about what it was like the day she was born and all the joy and happiness we experienced that day. I personally believe in a life after death, and
I know in my heart that one day I will get to celebrate this special day with her and it will be glorius!